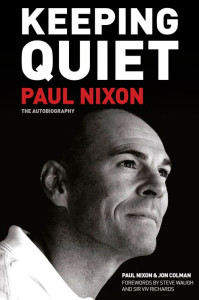 In 2012, Paul released his autobiography entitled ‘Keeping Quiet’, with co-writer, journalist and good friend, Jon Colman. The forewords, written by Steve Waugh and Sir Viv Richards indicate how respected Paul is in the game, not just in England but across the whole cricketing fraternity.

The book, published by The History Press, has been an overwhelming success and will continue to captivate and enthral readers for years to come.

Or to request a signed copy of the book, please get in touch.

Book of the Month September 2012 – ‘Written in uniquely pacey and conversational style, as you move through this volume (and you will do, quickly) it s Nixon s voice you hear: positive, to-the-point, impassioned; whether justifying his on-field verbals, recalling playing successes or describing his mental state during certain periods of his career (or, sometimes, simply at the time of writing). A book befitting the man; whilst an abrasive competitor and occasionally eccentric character, Nixon will ultimately be remembered as Waugh describes him: A bloody good cricketer and a great bloke.’ –All Out Cricket Magazine

‘Entertaining, funny, unique and full of banter, this book is a must read’ –The Middle Stump Blog