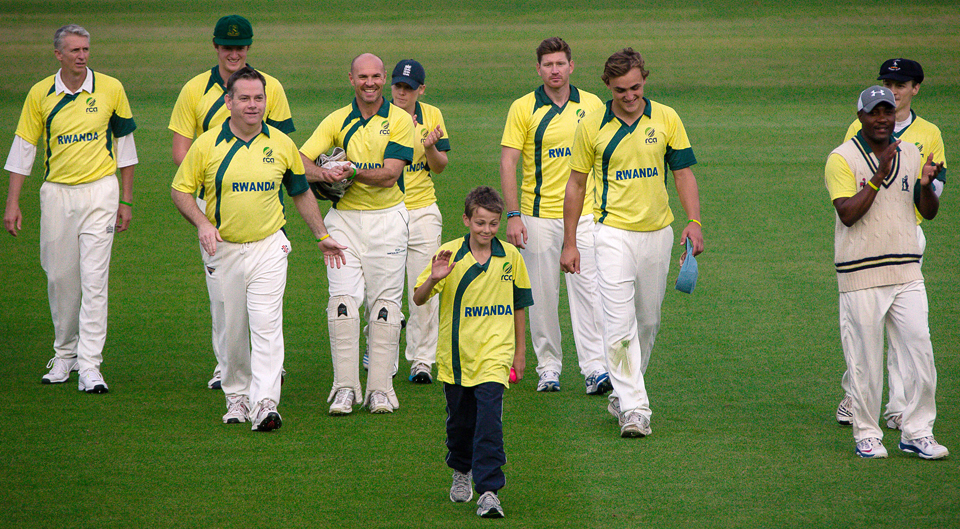 Paul Nixon joined some of the stars of world cricket to help raise funds for the Rwanda Cricket Stadium Foundation (RSCF), in a charity game that raised an incredible £50,000.

Paul turned out for a Brian Lara XI, which took on a Warwickshire 1994 All Star at the picturesque Wormsley Cricket Ground, with his team-mates included batting superstar Lara, Matthew Hoggard, Andrew Strauss and England women’s vice-captain Heather Knight.

However, it was the bowling performance of 11-year-old substitute Dee Jarvis (pictured right, with Brian Lara) that stole the headlines, after the youngster took a hat-trick of wickets having been selected to replace Hoggard by the man himself. Among Dee’s victims were Gladstone Small, who once helped England retain the Ashes.

The Lara XI reached a total of 218-7, with the Warwickshire All Star side responding with 189; but it was Oxfordshire youngster Dee that captivated everybody with his stunning showing in the penultimate over, which deservedly resulted in him being named Man of the Match.

The Rwanda Cricket Stadium Foundation was established to aid the building of an international cricket stadium in the nation’s capital of Kigali, with Lara a patron of the charity. The West Indies star states that the links between him and Rwanda in 1994 brought a stark contrast between ‘the best of times and the worst of times’. The year reflected one of the best in his illustrious career, whilst Rwanda was forced to endure its worst-ever period as genocide resulted in the death of one million Rwandans.

20 years later, Rwandan cricket is one example of the country’s incredible recovery from that conflict.

On the day, Brian Lara said: “It’s been a great day and it’s great to see so much support for the project. There’s a huge the enthusiasm for the game in Rwanda, and it’s vital that we support the Rwandan Cricket Association in harnessing the huge talent available. The last 20 years have seen the country make huge strides and sport can play a key part in building on that progress. When complete, the stadium and facilities, along with the local supporters, will help to create a lasting legacy for the game in this wonderful country.”